Home » Towards a new world order 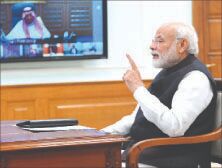 Among the many bouleversements that the Coronavirus pandemic has brought about across the world, it has also generated and continues to give rise to several fundamental and civilisational questions. Historically, periods and phases of acute crisis have given rise to such collective introspection. The same trend has picked up now. With more than half the world under a “lockdown” and with isolation, distancing, quarantine becoming the norm, a cycle of fundamental questioning and introspection seems to have begun. Caught up and tied to the vortex of quotidian living, such stepping back and redirection of questions is essential.

The defining word “globalisation”, which has dominated and directed global transactions for more than two decades now, is itself being relooked at. Can globalisation be unidirectional, can it mean the dominance of one pattern or one kind of vision, must it eliminate many roads and highways that have been drawn and marked by the repeated footprints and cart-wheels of caravans, explorers, philosophers and merchants? Can globalisation of one kind, erase the local, regional and national flavours and uniqueness. Must not the sharing of new knowledge, of new findings, data-sharing, all become the norm in a world that calls itself “globalised”? Should the exploitation of resources of others to fuel one’s growth machines become the norm? Should not there be a sense of accountability that must drive those powers and conglomerates who perceive themselves to be at the vanguard of globalisation? Why must the collective or national effort at re-looking at one’s civilisational and traditional ways of being be interpreted as “nationalist isolation”? Must not the priority to survive first give rise to the evoking of nationalist sentiments – a nation and people who have been shaped and defined over aeons through their traditions, through their cultural expressions, through their contribution to the evolution of humanity agree to subsume their identity for the sake of an amorphous, exploitative and selective power dominated globalisation? At times such as these, is it not a matter of propensity for one to seek out their roots and origin, to derive direction from one’s positive civilisational contribution and make it as a source of comfort and stability? These are some very rudimentary questions that are now collectively emerging against the backdrop of the pandemic.

There has to emerge a spirit of, as a notable historian and civilisational philosopher, Yuval Noah Harari, has argued, “global co-operation and trust” to face such situations. In a recently penned article on globalisation post-Corona, Hariri flags the need for countries to “share information openly and humbly seek advice” from each other and, more crucially, he points out countries “should be able to trust the data and the insights they receive.” Harari also emphasises on the need for a “global effort to produce and distribute medical equipment, most notably testing kits and respiratory machines. Instead of every country trying to do it locally and hoarding whatever equipment it can get, a coordinated global effort could greatly accelerate production and make sure life-saving equipment is distributed more fairly.” But the entire exercise and initiative must necessarily be based on trust; it is trust alone which can eventually lead to evolving a framework of cooperation. Can equipment and kits that are being designed and distributed by a particular country be relied upon, will the exercise of distribution of such equipment have greed as their underlying motive?

While participating in the recent Virtual G20 Summit, Prime Minister Narendra Modi was the only world leader to emphasis on the need to collectively focus on sharing and increasing cooperation while evolving frameworks to collectively face such unprecedented situations of transnational threats. He spoke of the need for data sharing, for sharing freely the benefits of healthcare research and new findings, and to, above all, keep the human dimension at the centre of our policy formulation, development models and structures of connectivity. Modi spoke of how an interconnected global village needed to evolve crisis management protocols and frameworks. Globalisation needs to look at these aspects. An effective response cannot be ad hoc, piecemeal, uncoordinated and secretive.

In his intervention, Modi underscored “the need to put human beings at the centre of our vision of global prosperity and cooperation, freely and openly share the benefits of medical research and development, develop adaptive, responsive and humane health care systems, promote new crisis management protocols and procedures for an interconnected global village, strengthen and reform intergovernmental organisations like WHO and work together to reduce economic hardships resulting from COVID-19, particularly for the economically weak.” This succinctly articulates the way forward, the inevitability of introducing such a collective global approach, if globalisation is to continue, albeit in redefined and a more humane manner.

Some of the leading public policy minds globally are coming round to these points. Joseph Nye, in an observation of his, printed in the Foreign Policy Journal, for instance, cites the American politician-public-policy expert Richard Danzing, on the dimensions of globalisation post-Corona. Danzig had argued that “Twenty-first-century technologies are global not just in their distribution but also in their consequences. Pathogens, AI systems, computer viruses and radiation that others may accidentally release could become as much our problem as theirs. Agreed reporting systems, shared controls, common contingency plans, norms, and treaties must be pursued as a means of moderating our numerous mutual risks.” American diplomat and author, President of the Council on Foreign Relations, New York, Richard Haas, for example, speaks of how the post-Corona world will see a modest strengthening of “global public health governance.”

This is what PM Modi emphasises on, the need for every nation, to contribute to governance and strengthening of global health-care and on the need for shared controls, contingency plans etc.

Nye argues that on transnational threats like COVID-19 and climate change, “the key to success is also learning the importance of power with others.” India has always displayed a consistent approach and respect for international protocols. Such an approach comes easily to her, since she has evolved it civilisationally, despite being colonised in the past, despite suffering ravages of centuries, her growth and coming on the world stage is not driven by a sense of centuries of humiliation. Her rise is natural, responsible, measured and conscious of world norms and needs.

But the most crucial and fundamental point that PM Modi made at the G20 virtual summit was when he called for all leaders “to help usher in a new form of globalisation”. The pandemic has, in effect, jolted us out of the routine track of the current phase of globalisation. It has and will end globalisation as we understand it. The world post-Corona will have to be defined, driven, and delineated by “new globalisation.” What that new globalisation is or will be, requires rigorous, impassioned and relentless pursuit.

(The writer is the Director of Dr Syama Prasad Mookerjee Research Foundation.)