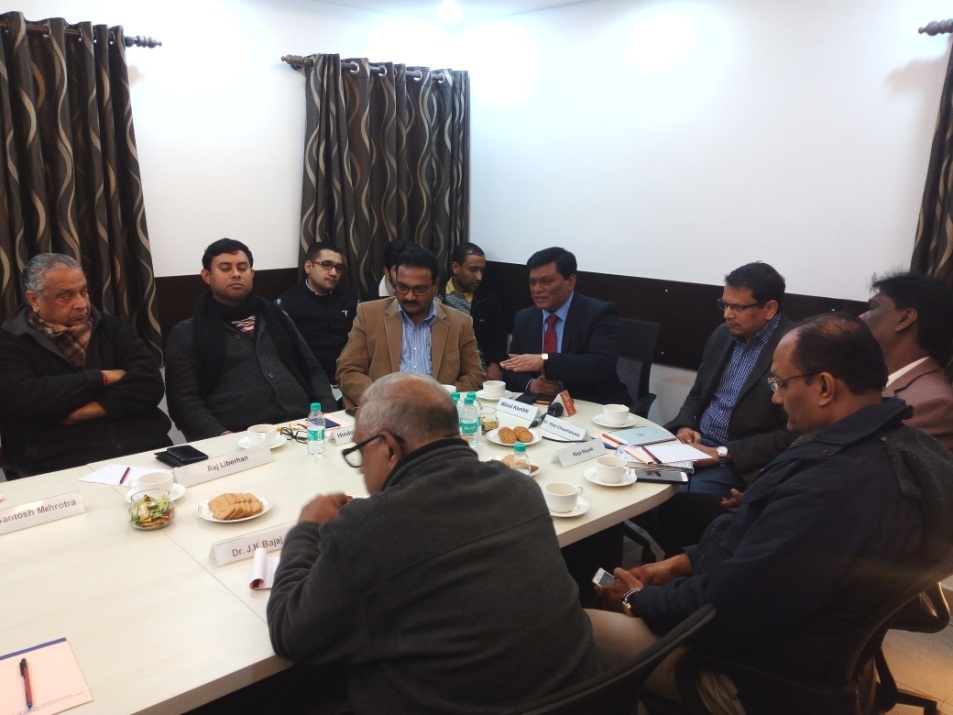 Round table discussion organised by SPMRF on 26th December 2015

“Dalit Entrepreneurship: Tracing the Empowerment Trajectory from Patronage to Partnership”

Dr. Syama Prasad Mookerjee Research Foundation (SPMRF) organised a Roundtable discussion on 26th December 2015 on “Dalit Entrepreneurship: Tracing the Empowerment Trajectory from Patronage to Partnership”. Mr. Milind Kamble who is the Founder Chairman of the Dalit Indian Chamber of Commerce & Industry (DICCI) was the Guest Speaker who spoke in details on the various aspects of issue.Welcoming the speaker Dr. Anirban Ganguly, Director, SPMRF, noted how his efforts were watershed and announced the beginning of a new era. He also observed that SPMRF was determined to continue with a series of dialogue and outreach on this very crucial issue so that this new effort is better understood and supported.

Mr. Kamble said that when India became independent in 1947, its Constitution banned caste discrimination and reserved seats for Dalits in the legislatures, government services, and some educational institutions. These reservations created a thin upper crust of Dalits in politics and government services. But caste discrimination remained wide spread, especially in rural India. However, major changes were sparked by economic reforms in 1991 by opening up the closed economy. The arrival of the competitive market and its creative destruction broke old caste bonds and facilitated the shift of Dalits to new occupations. The new economic reforms dismantled controls, accelerating growth and competition. Fierce competition soon ensured that the price of a supplier mattered more than his caste. This created openings for Dalit entrepreneurs. Although the Dalit revolution is still in its early stages, but now it is unstoppable. The new slogan is – Fight the caste system with capital. The new opportunities and fast growth created by economic reform opened up new business spaces for the Dalits to occupy. Traditionally, business was taboo for Dalits. But today millions of Dalits run their own businesses, and a few thousand have emerged as millionaires. Instead of being condemned to live at the bottom of the social ladder, these Dalits have become bosses, hiring upper caste workers. This is an unprecedented social revolution. Dalit-owned companies are now important suppliers of components to top automobile companies including Honda, Tata Motors, Bajaj Auto, and Hero Corporation”.

Mr. Kamble also spoke about how corporate farming boost yield and neutralises the caste order especially in rural areas. He said that mechanisation of farming is creating caste-neutral jobs that dismantle occupational hierarchy — the backbone of the caste order. The assembly line can be the greatest social equaliser. Bhautikvaad or materialism triggers consumerism — not just in towns but in the countryside as well. Consumerism boosts industrialisation that produces classes to replace caste. He also pointed out flagship programmes such as Make in India and initiatives such as MUDRA Yojana were imparting a big boost to efforts of Dalit entrepreneurship.

Mr. Milind Kamble is also an entrepreneur and in 2005, he founded the DICCI, which is based in Pune. DICCI works for the financial and social development of Dalits and organizes activities such as trade fairs. Today DICCI comprises of over 3,000 member-millionaires.

Besides this, Mr. Kamble is also a member of the Planning Board of the Indira Gandhi National Open University (IGNOU) and was awarded the Padma Shri in 2013, for his efforts towards the development of the Dalit industry. A lively discussion followed where a number of interesting suggestions came up and were discussed.