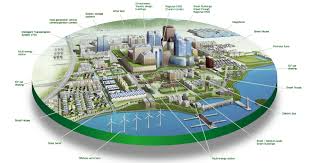 In a very positive move towards urbanization our honorable Prime Minister made an announcement that the country would soon have smart cities. Thereafter, this plan received support from the visiting President of USA. The entire country was elated and excitedabout this progressive suggestion.

It would be in line thus, to make some observations proposing a certain approach to the smart cities initiative. Can making islands of modern comprehensive habitat make a city smart? Just imagine a high-rise 40-storey building at Karkarduma East Delhi in midst of an almost slum like Karkarduma   village. What will the residents, of this so called smart city, see when they look out of their windows – dirt, slums and unhygienic surroundings. It will be akin to how Mumbai looks when you land at Mumbai, a swanky airport surrounded on all sides by Dharavi slums. Can a city, which is over-crowded, with over-stretched civic facilities, restricted water supply, inadequate electric supply and abysmal public transport become smart by adding an island of smart living?

Constructing new cities, with excellent infrastructure and world-class facilities, only can make smart cities. Existing cities can be made smart by removing slums and rehabilitating their residents in proper accommodation. Unplanned colonies must be reconstructed after re-planning them. However, slum elimination is a long-standing problem successive governments have failed to solve. Governments have allocated land in the outskirts of cities to get rid of slums. New slums came up in place of old ones and the dwellers have sold the land allocated to others.

A slum can’t be eliminated if one relocates its dwellers. The residents of slums have their vocation in the area around the slum and they can’t afford to lose their vocation. The answer lies in construction of high-rise small dwelling units in the existing slum location and allotting them to the dwellers. The finance for the project can come from construction of high-end high-rise buildings in the balance space and selling them at market rates. The sale of these units would fetch enough money to finance the project. Both types of units should be smart units and to ensure that they are attractive for buyers, the approach to the two-sections must be different. Gradually all slums will develop into smart habitats. To ensure a fair program, fool proof mapping of the existing slums must be done prior to the announcement of the scheme. It will also help achieve the long-term political goal of inclusive living.

The need to modernize also applies to areas not covered by Housing Boards/Development Authorities (like DDA). These so called ‘Lal Dora’ colonies are unhygienic, unplanned, overcrowded and unhealthy.  Above all, their presence would never let any city develop into a world-class city. A similar formula needs to be worked out, with certain modification, for these areas. The incentive for the residents of these colonies would be a government-sponsored reconstruction of their properties with a difference that it will be modern, smart and high-rise. The balance land again can be used for smart high-end living, which will finance the project. The difficulty involved in making the residents agree for this can be overcome by offering them floor-areas more than the carpet area of their land (the exact factor can be calculated by an expert keeping the economics in mind). The existing colony will, of course, be razed to the ground.

Professional builders, with audit of the quality, must construct the buildings. Buildings need not be constructed with a focus of developing independent dwelling units. The rehabilitation units for slums dwellers must be designed on the lines of ‘chawls’ in Mumbai.  All dwelling units made in future must be designed to ensure that no individual can expand his habitat. A government legislation legalizing such reconstruction will be required.

Such a measure will help in better mobility pattern, reducing housing crisis and congesting. Urbanization not only means smart cities but also provision for better quality of life by increasing the choices available to individuals. Smart cities need to be safe cities in terms of prevention of risks of sanitation, infrastructure, etc.