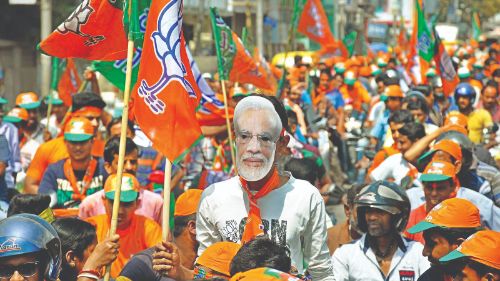 Outcomes of regional elections post 370 have reaffirmed how BJP’s narrative of nationalism and national unity holds the popular vote.

The recently concluded elections in Maharashtra and Haryana have indicated support for the governance vision and action followed by respective BJP governments in the last five years in these states. A strange narrative was floated within hours of the verdict which stated that national security and patriotism did not bother people and what the voter needed was opportunities, jobs and a government that was responsive to them. Interestingly, it is only BJP governments which score high on all these parameters. The Congress party continues to be clueless and in disarray. Its policy and approach to alliances remain confusing and it has been incapable of articulating a credible narrative or placing an alternative political and governance programme before the people.

The CPIM was nowhere to be seen in these elections and yet both parties claimed a moral victory. They have not been able to explain why they stand nowhere in the verdict, why is it that every verdict, since 2014, has further marginalised them. Their habit of taking potshots at PM Modi hasn’t paid out. Neither have all their attempts to fan the fires of societal conflict boded well for them. In more recent times, this has taken the form of repeated attempts to generate a narrative on the abrogation of Article 370 by painting a false picture of the situation on the ground in Kashmir which has failed to gain traction. At least their moral victory should have gotten translated into votes for themselves or should have reflected in the percentage of votes they have received.

To take the case of the loudest conglomerate, the CPIM, for instance, had polled 5.76 per cent in the 2014 assembly elections in Maharashtra, while in 2019 it managed to hang on to one seat and saw its vote percentage plummet to a measly 0.37 per cent. In Haryana, for example, the self-professed proletarian party garnered a minuscule 0.07 per cent of the vote share and no seats. This was reminiscent of the 2019 Lok Sabha elections where it had failed to open its account in West Bengal, a state it had ruled for nearly four decades. In the centenary year of their founding, the electoral footprints of the communist parties in India are abysmally shrinking but their grandstanding stance on national issues and their half-truths on policies and governance issues continue unabated.

The other election that has reinforced positive development narrative and has demonstrated the triumph of democracy at the grassroots is the recently concluded elections to the Block Development Councils (BDC) in Jammu-Kashmir and Ladakh. This was the first-ever election for the BDCs since 1947 and saw a record 98 per cent votes polled. Never had the region witnessed such a phenomenon. The Congress, PDP, NC and the communist parties boycotted the elections in order to delegitimise this democratic exercise. The CPIM, for example, has hardly any presence in the state and yet these parties thought that they would be able to stall the process or exhibit to the world that the exercise was futile.

But they could not arrest the tide of enthusiasm in favour of the democratic process in the region. There were 1065 candidates in the fray for 310 blocks. This meant that each block was being contested by at least 3-4 candidates. Such participation demonstrated the eagerness, the enthusiasm and the determination among the people to enlist in the democratic process. The abrogation of 370 has unleashed their full democratic fervour and potential. In districts such as Pulwama and Shopian, the turnout was recorded at 85.3 per cent and 86.2 per cent respectively while Srinagar recorded a 100 per cent turnout. This was despite threats from terrorists who had vowed to disrupt the historic democratic exercise but could not or did not carry out their plans.

BJP won 52 seats in Jammu, 18 in Kashmir and 11 in Ladakh. Significantly, BJP won eight seats in Rajouri district and seven in Kishtwar. In the militant hotbed of south Kashmir’s Shopian district, BJP won eight blocks. Independents won a total of 217 blocks. The results have again proven BJP’s determination to firmly root democracy in the region and to ensure that people at the grassroots have a say in their destiny. This was its commitment to people of the region when Article 370 was abrogated and when PM Modi had enunciated his new vision for the region’s growth and prosperity.

Independents winning a large number of seats indicate the legitimacy of the exercise and demonstrates a strong determination at the grassroots for experiencing the democratic process of election and of being elected and empowered. PM Modi has welcomed and rejoiced this democratic determination and asserted that the spirit of resilience and democratic triumph shown by the people of the region ought to be welcomed by all democratic-minded citizens and parties.

If looked at from the dimension of the communists and their political presence and relevance, the local body elections in Jammu-Kashmir and Ladakh clearly showed how disconnected the communist parties are from the ground. Their leaders have daily postured against the abrogation of 370, have adopted extreme positions, have predicted apocalypse and have attempted to spread a sense of panic and fear among the ordinary Kashmiris. But when it came to legitimately spreading their political narrative on the ground, the communists avoided doing so by boycotting the elections. Sita Ram Goel, for example, writes on the communists disdain for the fundamentals of democracy thus, “There are popular notions that communism is an ideology of certain economic, political, social and cultural ends, namely, equality, liberty, fraternity and so on. But there are so many people who fervently believe in these ends and yet denounce and are denounced by the Communist Party. In fact, communist scriptures repudiate equality as a “bourgeois prejudice”, ridicule liberty as a “bourgeois illusion” and look down upon fraternity as “bourgeois sentimentalism.” On the other hand, Modi’s new narrative for the region is based on these very fundamentals of equality – equality of opportunity and citizenship, liberty and fraternity among the people of the region and India as a whole. The communist narrative and false-view, therefore, has no place in this new dawn.