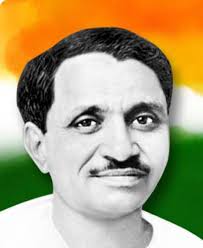 By A Surya Prakash
The Bharatiya Jana Sangh founder has been written off as one who called for a Hindu India. But those familiar with his views on integral humanism and democracy see them reflected in the current Government’s policies
A major step towards understanding the social, political and economic philosophy of Pandit Deendayal Upadhyaya — an important political thinker and philosopher of modern India who bears tremendous influence on those who now run the Union Government and many State Governments — was taken last week with the launch of an exhibition to highlight his thoughts and ideas at the Nehru Memorial Museum and Library.
Pandit Upadhyaya was one of the founding fathers of the Bharatiya Jana Sangh, the precursor to the Bharatiya Janata Party, who argued that integral humanism, which encapsulates the various features of Bharatiya sanskriti — abiding, dynamic, synthesising and sublime — should be the corner stone of state policy in India.
He outlined his philosophy for governance in a document he drafted for debate at the Pratinidhi Sabha of the Bharatiya Jana Sangh at Vijayawada in January, 1965. It was in this document that he first propounded his theory of integral humanism. Thereafter, he elaborated on it in a series of four lectures some months hence in Pune and Mumbai. This was put together in a book edited by noted historian Devendra Swarup and published by the Deendayal Research Institute, New Delhi.
Reproduced below are excerpts from this publication which provide us glimpses of his thoughts on integral humanism, the kind of state that should govern the people and on the ideals that should guide those who govern us. For want of space, this article is limited to a brief discussion on just one aspect of his political philosophy — his idea of democracy and individual freedoms:
According to him, dharma rajya has and should be the ideal of the Indian state. In such a state, “tolerance of and respect for all faiths and creeds is an essential feature”. Further, in a dharma rajya, “freedom of worship and conscience is guaranteed to all and the state does not discriminate against any one on grounds of religion, either in the formation of policy or in its implementation. It is a non-sectarian state and not a theocracy”.
He said this Indian concept was quite distinct from what is available elsewhere in the world but the nearest English equivalent  of dharma rajya would be the rule of law. In such a state, no individual or body is recognised as sovereign. Every individual is subject to certain obligations and regulations and the rights of all institutions and individuals, be it the legislature or the executive or the people at large, are all regulated by dharma and “licentious conduct is not permitted”.
On the one hand, dharma rajya would curb arbitrariness and totalitarianism and on the other, it would prevent democracy from degenerating into mobocracy. Significantly, he noted that while other concepts of the state propounded elsewhere in the world were oriented towards the rights of the individual, the Indian concept of dharma rajya was duty-oriented.
Pandit Upadhyaya’s concept of democracy was also comprehensive. For him, democracy was not just the means to exercise one’s political or electoral right. It went well beyond that. He said democracy has to be established not only in the political field, but also in the social and economic fields as well. “In fact, democracy is indivisible. It cannot be viewed in fragments. The absence of democracy in any one sphere is bound the affect the growth of democracy in the rest. Tolerance, dignity of the individual and a feeling of identification with the demos, the people — these are the essentials of democracy. Without these, the mere paraphernalia of democracy would be purposeless”.
Political, economic and social democracy should go hand-in-hand and the state must ensure universal adult franchise, freedom of occupation and the free choice of goods and equality of status and opportunity for all citizens. “Efforts have to be made to ensure that all these rights complement one another and do not detract from the others’ effect”.
These are the thoughts of one of the founding fathers of the BJP and they constitute the ideological moorings of the party that governs India today. The Marxists may ignore him and the Congress may pooh-pooh him, but India cannot ignore Pandit Upadhyaya because the times have changed.
The BJP has emerged as a national party by winning a clear majority in the Lok Sabha and securing parliamentary seats in 23 States and Union Territories in 2014 and winning over 1,000 seats in State Assemblies. It is also in power, either on its own or in a coalition, in many large States including Madhya Pradesh, Maharashtra, Gujarat, Chhattisgarh, Punjab, Haryana, Jammu & Kashmir and Jharkhand.
We must remember that his thoughts today influence Prime Minister Narendra Modi and most members of his Cabinet, many Chief Ministers and hundreds of Ministers in the States ruled by this party and well over a thousand lawmakers in Parliament and in the States. Just one example will suffice. Look at the impact of Pandit Upadhyaya’s thoughts on the need to ensure complete democracy that subsumes all aspects — the political, social and economic. He wanted the state to ensure equality of opportunity, equality of status and freedom of occupation to every citizen.

Many schemes launched by the Modi Government bear the stamp of Pandit Upadhyaya, be it the Jan Dhan Yojana, the low premium life insurance and accidental death insurance schemes for the poor, Digital India and the programme to impart skills to the unskilled, so that they become employable. Of all these schemes, the Jan Dhan Yojana, which enabled the poorest of the poor to open bank accounts, even if one did not have a single rupee to deposit in them, would have gladdened the heart of Pandit Upadhyaya.
A whopping 180 million such bank accounts have been opened in the country under this scheme, which facilitates hassle free cash transfers by the Government to poor citizens entitled to subsidies, pensions etc and also opening of low-cost insurance policies.
So, is Deendayal Upadhyaya a ‘Right-winger’? Did he lay the foundations for a party wedded to theocracy and a ‘Hindu’ India? Sadly, he has been a victim of a cheap and dishonest compact between the Marxist and Nehruvian schools to attach bogus labels on thinkers like him. They have also ensured that since independence, the postulates of political thinkers like Pandit Upadhyaya are blacked out by the academia and media, and never discussed or brought into the public domain. This blackout must now end.
If we wish to know who influences the people at the helm today, we must set this right without any further loss of time.