Home » CAA: Through the Lens of the Constitution 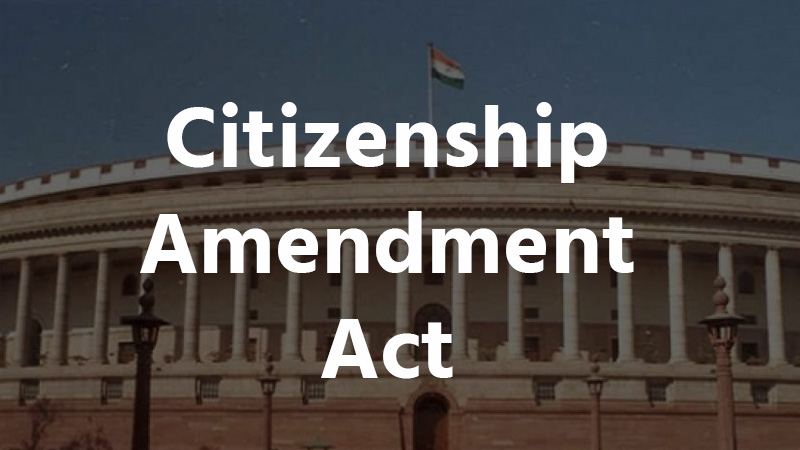 The Citizenship Amendment Act (CAA) passed through the scrutiny of Parliament but failed the appraisals of a few detractors, who are now creating unrests in various parts of the country. As PIL’s have been filed challenging the constitutionality of CAA, it’s time to take a look at what the constitution has to say.  The Article 11 of the Indian Constitution empowers the parliament to frame laws for acquisition and termination of citizenship and all other matters relating to citizenship. The Article 14 of the Constitution provides for equality before law and equal protection of law to any person. It prohibits class legislation but not legislative classification.  A law to be valid has to content with a two pronged test of the doctrine of reasonable classification of Article 14 i.e. Intelligible differentia which means the basis of classification should be able to distinguish between persons grouped together and the one’s that are left out and intelligible differentia having reasonable nexus with the object as has been held in the 7-judge bench of Kathi Raning Rawat vs The State of Saurashtra[1]. Persecuted minorities in Pakistan, Afghanistan and Bangladesh form the Intelligible Differentia for the amendment and object of the law is protection of these minorities. It is achieved by granting citizenship to these minorities and therefore CAA is not ultra vires of Article 14 of the Indian Constitution.

There is an argument that this law is ultra vires of Article 15 of the constitution. This argument holds no ground as Article 15 is only applicable to citizens and this law grants citizenship to non-citizens and hence does not fall within the ambit of Article 15. Article 21 provides that the law passed by the parliament should not be arbitrary but just, fair and reasonable as has been held by the 7-Judge bench in Maneka Gandhi v. Union of India[2]. One important aspect needs to be kept in mind that CAA is not an act by itself but an Amendment to The Citizenship Act. Therefore, it becomes pertinent to study the Citizenship Act, 1955. The argument that the amendment is ultra vires because it doesn’t include Rohingyas suffers from two fallacies. Firstly, the Citizenship Act restricts citizenship unless it has been provided for by it. The CAA provides an exception to this Act where Hindus, Sikhs, Jains, Parsis, Christians and Buddhists who are being persecuted in Pakistan, Afghanistan and Bangladesh would be granted citizenship and is a valid classification according to Article 14. If the act becomes arbitrary because it doesn’t grant citizenship to illegal immigrants is to imply that the entire Citizenship Act is unconstitutional which is absurd contention. The right of a nation to decide that who are to be the citizens is rooted to the sovereignty of the nation which has been mentioned in the preamble of the constitution. However, sovereignty of a nation is a natural connotation of right to self-determination which has gained erga omnes status in East Timor case[3]. Secondly,  the foundation of the constitution is separation of power  as has been held in Indira Nehru Gandhi vs Shri Raj Narain & Anr[4]  and it is the prerogative of the Legislature to form laws granting citizenship in accordance with Article 11 of the constitution.

Article 25 provides for freedom of practicing, propagating and professing of religion by any person. One is unable to comprehend that how can grant of citizenship to persecuted minorities from Islamic nations restricts right of Indian Muslims to practice, propagate or profess their religion. Smear campaigns are being run by the political parties to create unrest among the general public by misleading them. A humanitarian law is being categorized as a draconian law to provoke the public to riot. It is pertinent that such malignant attempts are defeated through awareness campaigns to protect the secular fabric of the country.

The next argument is that secularism, which is part of the basic structure of the constitution as has been held in S.R. Bommai vs Union Of India[5], is being tampered with. If protection of minorities, whose daughters are being kidnapped and raped[6], whose places of worship are being ransacked and destroyed[7], who are being killed[8] because they belong to a particular religion and are subject to other atrocities, is not secularism, then I beg to differ on the definition of secularism. Further, the contours of secularism have not been defined anywhere and it a nebulous concept to be invoked.

It is conspicuous that CAA is not ultra vires of the constitution but it has become an instrument for serving the political agenda of the left, Congress, TMC, AAP among others i.e. to divide the nation on religious grounds. They intend through lies and fearmongering to create unrest. This would be used to create political convolution and contortion which may lead to political gains of what would otherwise be an appalling performance in the democratic electoral process of this country.

(Aman Sharma is a student of law at O P Jindal Global University. He is working as an intern at Dr. Syama Prasad Mookerjee Research Foundation)